Back in Flagler Beach from St. Augustine for another two weeks, I was wondering why I’d bothered to come south with the temperatures you see here.  The top number is the temperature outside and the bottom the temperature inside.  Seriously, it was no colder in Virginia than this.  The temperatures below the 38 are the high and low for the day.

THIRTY ONE????   If this is December, I’m glad I won’t be here in January and February.

But I can sit inside and look out my front picture window if I like, as soon as I get the temperature inside up from 44.  Not as great a view as some other sites I’ve had here but definitely not shabby and I’m grateful to be here.

I dress in my appropriate sweat shirt for cold weather and the season.

One thing I like very much about this site is that unlike my previous site here, it is buffeted from the winds by vegetation.

I’ve mentioned before that because sunrise is right out my front window and sunset on the other side of the park, I attend both daily.   It is wonderful to be able to see both so easily each day.  Although you have to dress for mosquitoes at sunset since it seems to be their very favorite time of day and there is no ocean breeze to discourage them.

You can tell by looking at this picture at dawn that it isn’t as warm in Florida as every one thinks.  Or at least this looks as cold as it was to  me.

The sunrise that followed was hazy as well.

Not too cold at sunset though or the mosquitoes wouldn’t be a problem.  The sunset on Thursday was lovely and the after color amazingly different but they were about 20 minutes apart.

I spent a couple of days holiday shopping both on line and in person for Carrie, Matthew and the kids.

Another day  gift wrapping.  Nearly one entire day trying to find a box for the gifts without paying $20 to UPS just for the box.

Finally after trying walmart, target, dollar tree and dollar general, Home Depot to the rescue for $4.  UPS also decided they wanted $75 to ship 14.4 pounds from Florida to Maryland.

Too much says I, so I give the USPS $55 to ship it.  Still seems high and especially given that I mailed it at 8:45am December 12th (even though it didn’t get checked in until 3pm,  and as of 1pm December 24th it still had not arrived in Maryland .  As you can see above, notifications informed me that it took 6 days to go 60 miles from Flagler Beach to Jacksonville where it appears to remain.  Daily they tell me it is “still on the way” but “arriving later than expected”.  My receipt says “expected December 17”.  Clearly in spite of having 2 weeks, it isn’t going to arrive by Christmas.  I’m very disappointed.  Guess I’ll have to rethink UPS.

Thought, on the other hand, I do feel sorry for the USPS given how badly they have been treated by the current administration who must be in bed with Fed Ex and UPS to have cut the USPS budget and its work force so seriously.

Clearly they want them to fail and with so many Christmas presents not delivered on time this year, they may well have caused people to be unwilling to use the USPS and thus they will fail.   I wonder if this is another one of the things Biden can or will fix?

To lighten up my rants both for and against the USPS, I’ve added some pictures of the outdoor decorations of my neighbors.  I have awning lights that David used to put up but the winds are too iffy here for me to want to put them up and probably just have to turn around and take them down.

But I do decorate inside even though it’s just me.   Last year I did not since I flew to Maryland to be with Carrie and her family.  So this is the first time I have had these decorations up since David’s death.  It’s bitter sweet.

The little green tree in the middle this year is a gift from my friend Pam who might have thought I wouldn’t have a tree.  She sent it to me along with my birthday present which of course arrived nearly a week late.  But it just extended my birthday so that was fine.

The present was amazing - two pair of HAND KNITTED socks. Socks are HARD to knit.  Not like a scarf.  I’m overwhelmed with the amount of time and effort she so lovingly put into such a difficult gift.  Thank you Pam!  I will think of you and feel warm and loved every time I wear them.

The golden wreath on mu door marks the Winter Solstice and the return of the SUN!  I hope this return of sunny times is true for us all and for our country.

At first I didn’t hang the stockings as we always did but a few days later I decided to.   You’ll notice the Santa hat on the chair arm says “naughty”.  On the other side it says “Nice”.  David always liked to wear it with the Naughty side out though after his teenage years (they say) he was never naughty.

It’s hard to know how much I have to let go of as the years pass since his death.  This is my second holiday without him and no easier than last.  Perhaps harder actually since I cannot be with Carrie either.  My first holiday alone in my entire  life.

The weather seemed to reflect and probably contribute to my feelings.  There were many cloudy sunrises here and some when the sun was barely or not visible at all as it came over the horizon.  But each one was unique and a blessing as “morning is broken.”

While we were having gray skies, the northeast was getting a snow storm.  My friends in Virginia were disappointed that only rain got to them but Matthew and the 3 C’s got enough snow to go sledding for a few days.   She sent videos and it was great fun watching the kids and her go racing down the hill.

Probably in honor of that northern snow.  Someone constructed this sand man/woman on the beach.  Definitely brought a smile to my face.

I’ll close with a reminder of brighter days and times.  This was our Winter Solstice in 2014 when Carrie came to visit us.  By the time you read this, Christmas 2020 will be past but whatever version of these winter holidays you celebrated I hope they were merry and bright! 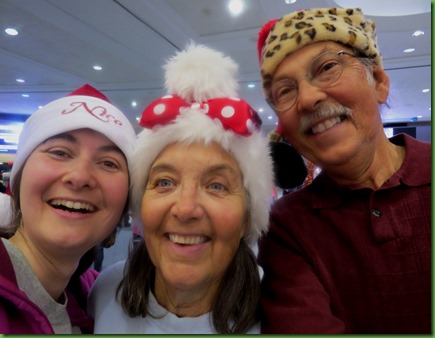